what you’re telling is just a story

Of course it’s no where near that easy, but that’s okay. You’re brain does what it does, things keep coming back until your brain is done with them. And each time you practice the same thing you do during meditation, you let it go.

Posted in Philosophy, Quotes | Tagged Buddhism | Comments Off on what you’re telling is just a story

Commentary: TPH #336: How Your Emotions Are Made

Commentary on:
TPH podcast #336: How Your Emotions Are Made | Lisa Feldman Barrett
Transcript on HappyScribe

I almost immediately disliked her because of the laugh at the beginning. I don’t know why but it struck me wrong. Then she started talking science and I liked her just fine.

Emphasis mine. You are feeling anger but the anger isn’t a “real” thing, it’s something your brain is doing to you.

I loved the bit around 29 minutes when she’s talking about how we feel something in the body and then we add a story about why we’re feeling that. Dan says but what if that really is why we’re feeling that and she shoots back, “there is no maybe, because there is your brain is making it”. This! This is something we all need to learn. Your brain creates feelings and emotions to nudge you in some direction. When we make up stories about them we are literally making up a lie and then believing the lie that we just made up! How weird is that? How dumb is that?

She continues talk more about how your brain constructs reality. You can feel wetness on your skin but your skin doesn’t have any wetness sensors. Your brain takes information from other senses and from past experience and creates the feeling of wetness. And as she points out, emotions are the same. They don’t have any existence in reality, they’re just a tool that our brain uses to drive us and then we make up stories about them. And we believe the stories.

I’m way, WAY behind on my podcasts. I don’t have a drive any more and I miss my podcasts. I’m experimenting with listening to them during the day but it’s always been really hard for me to listen while I work. Work needs thought and thought means words and there are words in my head and words coming from the podcast and they collide and become a nonsense mess. Maybe that’s not true any more, lets find out.

I was very keen to listen because of the topic, but I didn’t care for her in the beginning. It was largely because she seemed to be doing that slow talking thing that some people do to convince you they’re “deep”. I have the impression, largely from podcasts, that it’s prevalent in some “spiritual” circles and to me it reads as very fake. I can see having a public voice, one where you do try to slow down a bit and consider your words and perhaps enunciate more carefully. This doesn’t come across like that. Later on I think she lightened up and started sounding more like a normal person and it happens that later on I warmed to her a bit.

Some random comments from various bits of the podcast.

I checked out for a large part of the podcast so… experiment not a complete failure but also far from a success.

I do like the idea of writing commentary on media I consume. I want very much to spend more time writing.

Adding more as I found a transcript:

When asked why she chose “oneness” as a topic she says “because the world isn’t, at the moment, and it doesn’t appear to want to be one”. I disagree. The world is one and it can’t possibly be any other way. She means the people in the world and yeah, they’re kind of looney but that’s always been true. Social media and media in general make it more obvious than it was in the past.

Around 12 minutes there’s a bit where she talks about people seeking a “better” part of themselves and about being “born perfect”. I hate shit like that. You were born neutral, a blank(-ish) slate. If you were born into a slave owning family you probably grew up to treat one group of people like shit and another group like saints. You were born ignorant and what you learned growing up has a lot to do with how you turned out, it’s not the whole story, but it’s a major influence.

Ugh, in following up Dan says “there’s something pure there” and I remember noticing that while listening and vomiting a little. See “better” and “perfect” and “pure” are all value judgements. Value judgements come from the ego. They’re some bit of us that’s trying to make us feel better about ourselves. I think that’s sort of necessary for the human animal but I think we need to recognize it, see it for what it is and be cautious about it.

About 19 minutes is the place where she says “there’s nothing magic about it, but there will be magical moments”. Seen in context I don’t care that much for what she says but as a comment on meditation and life in general it’s perfect and beautiful.

I liked her story about the New York canyon but several times she’s gone about nature. There’s nothing special about nature. Humans are natural and everything we make and do is natural. NYC is ants would build if there were a little bigger and liked angles and living above ground. There’s nothing unnatural in the world. Manmade is a different story, but as she points out the sense of awe can come on you anywhen.

Around 27 minutes she’s talking about getting to the sense of oneness and she talks about the “discipline of your body practice” and I’m all…. meh. There’s definitely a very large benefit to that when you’re first learning meditation but you can have a sense of awe without ever meditating. Children have an amazing sense of awe because they’re a blank slate and everything is new and amazing to them. But life makes most of us jaded and kills our sense of awe pretty early. I think that could be a sign of progress in meditation… if your sense of awe is growing then your meditation is going well. Keep it up.

And… I’m checking out at this point, which is about where I did while it was playing. This about half way according to the transcript and I see some interesting bits coming but I need dinner.

Is a book about decluttering by Gretchen Rubin. She was on the 10% Happier podcast recently and seemed cool. Book is about organization. I’m not big on organization but she had some pretty good hacks.

Some things cannot be fixed. They can only be carried.

Heard Megan on The One You Feed podcast.

The Failures of Capitalism

Dalio himself isn’t setting out to build a worker’s paradise or to make financiers like himself obsolete, but he does have some trenchant thoughts on capitalism’s failures—and they are many, in his estimation.

I didn’t watch the video and I haven’t read Dalio’s essay on Why And How Capitalism Needs To Be Reformed (though it’s on my reading list) but my quick thoughts are that capitalism only has two faults.

A note on morality: I’m not saying the people, CEO’s etc, are amoral, though many of them are, I’m saying the system is amoral. Capitalism’s definition doesn’t include anything about morality. Here’s the definition from Wikipedia:

Capitalism is an economic system based on the private ownership of the means of production and their operation for profit. Characteristics central to capitalism include private property, capital accumulation, wage labor, voluntary exchange, a price system, and competitive markets. In a capitalist market economy, decision-making and investment are determined by every owner of wealth, property or production ability in financial and capital markets, whereas prices and the distribution of goods and services are mainly determined by competition in goods and services markets.

Emphasis is mine because now I see the problem in the US. We’re not capitalist. We definitely believe in “private property”, “capital accumulation” and “wage labor” but we don’t believe in “competitive markets”. We give lip service to the idea but if you look around the US what you find is giant corporations using their size to push out or buy competitors or smaller markets where the government has been manipulated to kill competition.

So what type of economy believes in “private property”, “capital accumulation” and “wage labor” but not “competitive markets”? Cause the US needs to stop calling itself capitalist.

Read Daylio’s article, Why And How Capitalism Needs To Be Reformed and I’m in agreement with most of it but I don’t see the “how” part. He says some stuff about “leadership” and then he says “redistribution” and… no actual “how”. Basically he’s says in a very milquetoast way that the people at the top need to get their shit together. Really? Those are the people benefitting from the current system. Not sure you’re gonna get them on board with changing things. Getting them to give lip service to “change” while not really doing anything should be pretty easy but if you want real change you might need to convince voters to stop supporting people that don’t support them.

You can’t have freedom without safety

This showed up in my RSS feed: An LA gallery is selling “Molotov cocktails” from a vending machine.

It included an image of a vending machine that sells fake molotov cocktails with a slogan on the side:

Freedom not safety is the highest good.

And I get that these folks are making a statement but why do they think it’s possible to have freedom without safety? Freedom to dodge bullets isn’t freedom. 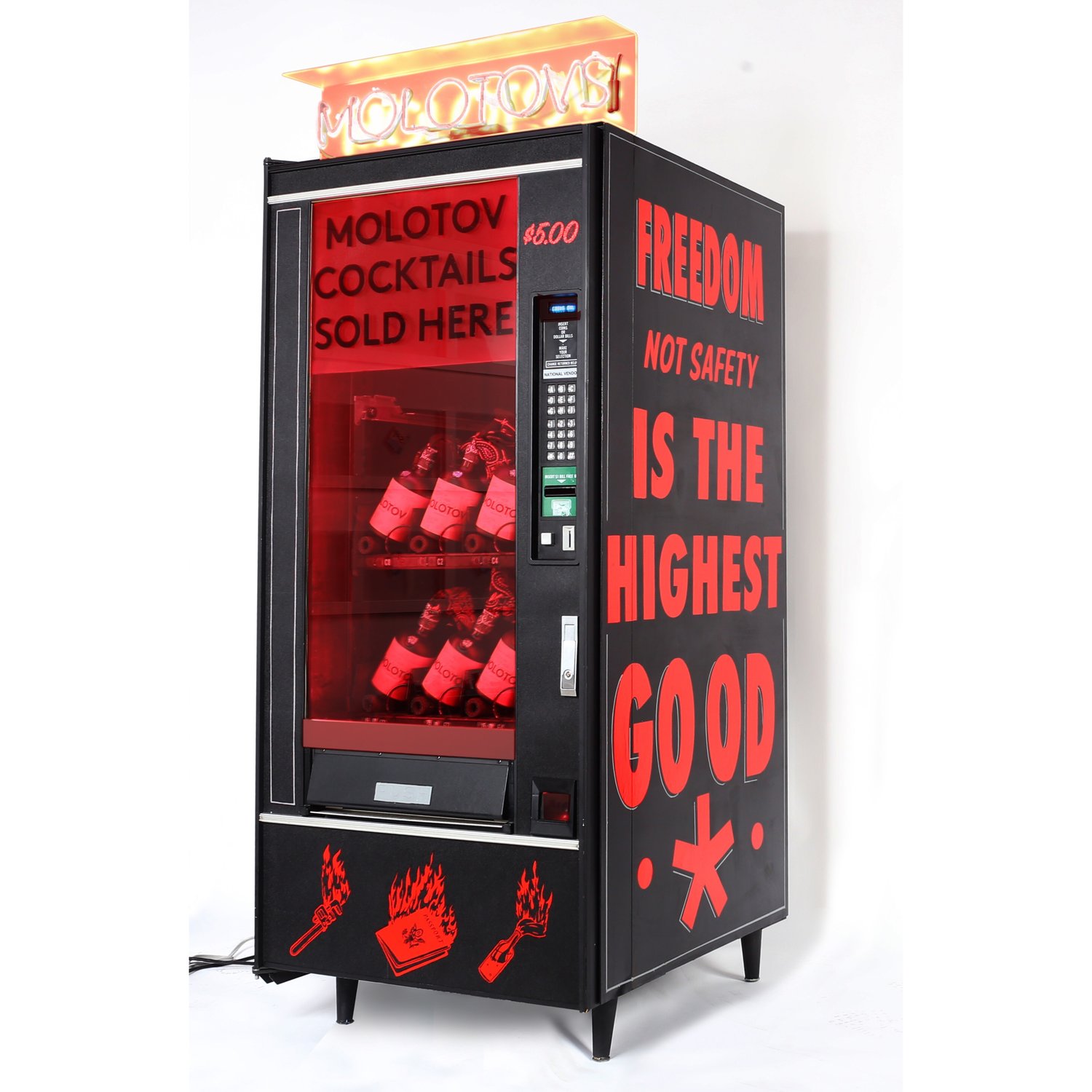 Yes, more of this please. The two attributes I want in a politician are logic and ethics.

The Need for Competition

THIS!!!! Holy shit how can the Republicans who are supposedly so pro-market allow the market to be dominated by so few players?!? Because they’re not really pro-market? They’re just pro-rich assholes giving them money.

Jason Furman, the chair of the Council of Economic Advisors under President Obama and now a senior fellow at the Peterson Institute for International Economics, argues that “both microeconomi…

Source: The Need for Competition

Posted in Society | Comments Off on The Need for Competition

Posted in Reading | Comments Off on Standard Ebooks: Free and liberated ebooks, carefully produced for the true book lover.